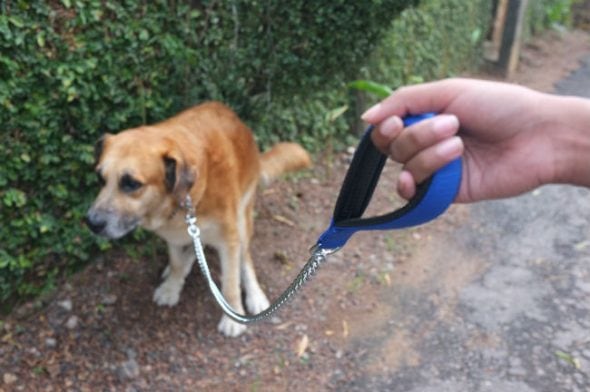 DNA testing to catch owners who fail to scoop their poop is catching on. Photo: Indi Samarajiva/Flickr

The science of DNA has worked wonders in the realm of justice, helping police solve crimes and even free the wrongfully convicted. But for folks fed up with dog owners who don’t clean up after their pets — the small Italian town of Malnate is using DNA to do something that was largely un-enforceable until now.

ABC News reports that earlier this year, Malnate’s environmental department asked the town’s dog owners (2,156 dogs are registered) to submit saliva samples. Owners who failed to do so within the allotted period were fined $58.

It’s been a problem for Italian officials. Fines for not cleaning up after your dog are stiff, but of course, difficult to enforce.

Now, in Malnate, owners who fail to do so can be tracked down.

“The deterrent effect is considerable. Knowing that the local dogs are now recognizable has led many of their masters to behave civilly and the sidewalks are cleaner,” Giuseppe Riggi, Malnate’s environmental commissioner, recently told reporters. “At the same time, pet owners thank us because now the other citizens look at them with less distrust.”

(It’s catching on here in the States, too! See video!)

The dog population in Malnate rises each year, so city officials plan to work with local vets to collect DNA samples from new arrivals.

A total of 12 samples has been collected from sidewalk “evidence” thus far. Nine of them yielded usable DNA samples. After cross-referencing with the town’s database, seven matches were made — and seven owners fined.

Malnate has received requests from 83 other municipalities across Italy about the program.

“They are only waiting to see if the fines will pay for the costs,” said Riggi.