August 10, 2016: We’ve scoured the Web to find the best and most compelling animal stories, videos and photos. And it’s all right here. 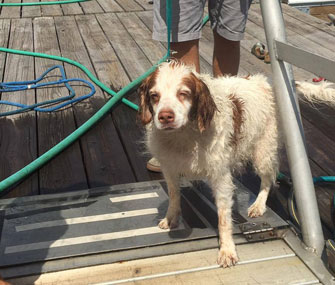 A spaniel who fell overboard from a ferry was rescued by fishermen off Martha’s Vineyard in Massachusetts.

The Island Queen ferry was headed to Martha’s Vineyard from Cape Cod, Massachusetts, Monday morning when the passengers and crew spotted a dog about a mile offshore. The 125-foot ferry started to circle the spaniel, but the boat was too big for anyone to get close enough to grab her. When the captain saw a small fishing boat in the area, he sounded the horn and the people on board shouted to get the attention of the men on board. The passengers on the ferry cheered as the fishermen pulled the dog safely aboard and gave them a thumbs-up sign. “It was just so heartwarming to see,” said ferry passenger Carol Portier. Fisherman Michael Hamel brought the dog to the harbormaster’s office on Martha’s Vineyard, where he discovered she had fallen off an earlier ferry on its way to the island. Chesney was reunited with her relieved family. — Read it at the Cape Cod Times and watch it at Fox 25 Boston

Study: Dolphin Moms Sing to Their Babies in the Womb

New research suggests dolphin moms teach their babies a “signature whistle” right before they’re born and in the two weeks that follow. Dolphins make these unique sounds to identify one another. Young dolphins will develop their own signature whistle, but in their first few weeks, their moms focus on teaching them their individual sound. In 80 hours of recordings, the scientists found the mother dolphin started increasing her signature whistle two weeks before the birth, possibly starting the learning process. The findings were discussed at the annual meeting of the American Psychological Association. — Read it at Live Science

The Oregon Zoo has released the last of more than 400 endangered Oregon silverspot butterflies at a U.S. Forest Service site in Mount Hebo, in Tillamook County. The rare butterflies were reared at the zoo and pupae have been transported to the area weekly over the course of the last month. Silverspots are endangered due to habitat loss in their native northwest range. Mount Hebo is one of only five remaining population sites for the butterflies, which once ranged from northern California through British Columbia. — Read it at Discovery News via Seeker 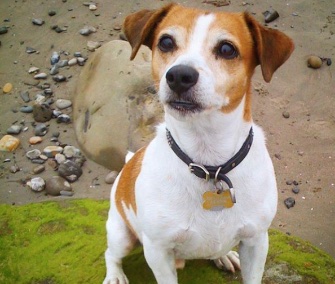 Rob Lowe mourned the passing of his family’s dog, Buster, on Instagram Monday.

Former “West Wing” actor Rob Lowe shared a heartfelt goodbye to his 16-year-old Jack Russell Terrier, Buster, on Instagram Monday night. “Buster was the best #dog a family could ever ask for. An unforgettable spirit of love, loyalty and energy. And a huge part of raising our sons. We are grateful to have had him for so many years and so many memories. No one will ever forget our great #Buzzoom”. #love,” he wrote. The post came just a day after the 52-year-old star shared a photo of his son Matthew cuddling with the dog, and sharing that his son was starting law school on Monday. — Read it at the U.K.’s Daily Mail

Dog Who Rescued Himself Gets Adopted

Last month, we told you the heartbreaking story of Maverick, the emaciated German Shepherd who gnawed off his own paw to escape a tether he was entangled in for at least a full day outside his Boston home. Veterinarians at MSPCA-Angell were able to reconstruct his foot, and the group was amazed at the public’s response to Maverick’s story. More than 1,000 people called or emailed to ask about adopting him, and $57,000 in donations poured in to cover the cost of his surgery. Now, there’s a happy ending for the brave pooch. “Maverick has been adopted!” the MSPCA posted on Facebook Tuesday. “He’s well on the road to recovery and we’re grateful to his new family for opening their safe and warm home to this special dog.” — See photos from MSPCA-Angell via Facebook