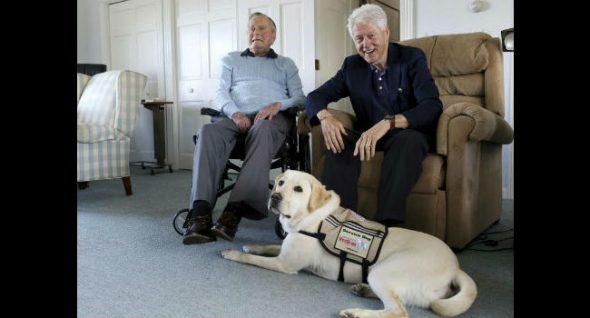 Sully is the newest member of the Bush family!

Former President George H.W. Bush welcomed the yellow Labrador retriever to his Kennebunkport, ME, compound this week. Sully will be the 94-year-old’s new service dog. Sully and President Bush, a lifelong dog lover, reportedly hit it off quite well.

Bush aide Evan Sisley told Maine Public that Sully, who was trained by America’s VetDogs, can open doors, pick up items and summon help if needed, but “more than anything else, the dog will be a wonderful companion.”

A now-viral Twitter photo showed Sully relaxing at the feet of Bush and former President Bill Clinton, who visited the Maine estate on Monday.

Sully will join the rest of the pack as two Bush children — Neil Bush and Dorothy Bush Koch — together have five dogs in Kennebunkport.