Making Weighty Decisions for Our Dogs 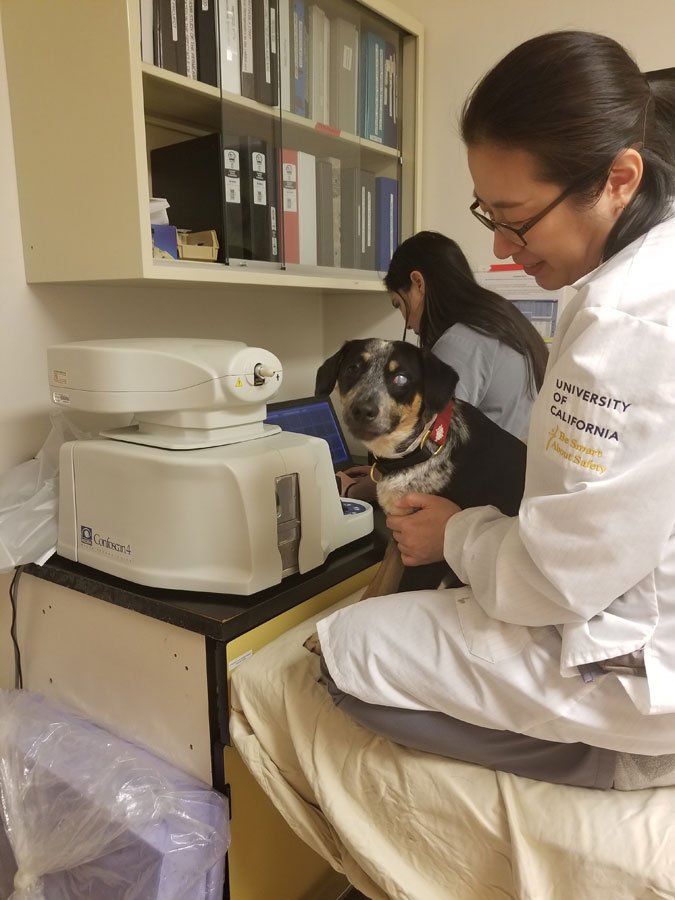 As I explained in a couple blog posts (here and here), about two months ago my foster puppy Odin, who has been receiving treatment for a nonspecific condition in his left eye, was initially accepted into a study at the U.C. Davis Veterinary Medical Teaching Hospital – a study in which his eye would be treated with a promising new medication, already approved in Japan. The medication is intended to treat corneal endothelial cell dystrophy – something that, it appeared, Odin may well have.

To start the process, I brought Odin to an ophthalmology lab at the VMTH for some extensive tests, to get a baseline on the condition of Odin’s healthy eye as well as the problematic one. That’s when we discovered that an injury, not disease, was likely at the core (literally) of his eye troubles.

Using optical coherence tomography, the technicians were able to get images of the interior of Odin’s cornea. They observed that a tear or bubble has formed between the corneal endothelial layer and the next layer upward (outward), the Desemet’s membrane. The doctor who heads the study told me, “Well, the medicine we are testing absolutely won’t hurt, and might possibly help, although this is not what it’s designed to do… And we’ve come this far. It’s up to you, but I am happy to reexamine him if you want to try the medication.”

Sadly, we had our follow-up appointment, and if anything, the tear, or bubble in his eye, is a bit worse.

The doctor was as disappointed as I was, even though she said that we were hoping the medicine might possibly do something that it’s not actually expected to do. It has been shown to reduce intraocular pressure, to reduce corneal thickness, to promote corneal endothelial cell proliferation, and even to enhance corneal wound healing – but the ability to close a separation between the endothelial cell layer and the Desemet’s membrane is not something that has been previously demonstrated. Dang it.

We discussed Odin’s options. Realistically, they include only:

(1) Continuing to administer steroid drops and hypertonic saline daily, to control the corneal edema in an attempt to preserve what little vision he has in that eye (essentially, a fuzzy view whereby he can detect only basic light and dark), and staying vigilant about the condition of his eye, in case excessive edema requires that the eye be surgically removed for his comfort….

Or, (2), just going ahead and surgically removing the eye. This procedure is referred to as enucleation. In this case, this would mean no more pain and no more daily doses of medications many times a day, but obviously, the total loss of vision on one side.

I came home a little bummed out. I was hoping for some signs of progress, something that would encourage us to keep going with this medication. But after the news that the bubble in his eye was worse, not better, I started to feel like it would be best to just go ahead and schedule the enucleation surgery.

Odin gets a few treats after EVERY SINGLE DOSE of medication, so he steps up and takes it like a champ, but it’s obviously not at all enjoyable. The drops are not that bad, but the ointment, especially, is a pain. It is hard to administer without poking him with the tip of the tube once in a while (especially as he quite naturally squints his eye muscles as tightly as possible, while I fight to pull his eyelids apart to get the tube close enough to the eye, instead of all over his eyelashes). It is goopy, and makes the whole area around his eye sticky, and seems to irritate him and sting a bit. How much happier will he be without these many administrations of medication every day? Much, I would think! And he can’t really see out of the eye as it is, anyway! Let’s just get this over with, I thought. But I was sad.

A day later, my phone rang, and I recognized the number as originating from the VMTH (it’s been a long few months of interactions with the vets there!). The doctor who is doing the studies and who has examined Odin said, “Hey, I can’t stop thinking about Odin.”

I laughed. “Aww! Me, either!” I told her. “I’m really sad about his eye. I was really hoping we could do something for it.”

She said, “Well, I was thinking… There is one more thing we could try – but I have to warn you, it might not work, either.” She explained that there is a procedure where the Descemet’s membrane is surgically stripped away, and then the eye is treated with the same medication we were trying before, the one that is undergoing trials for approval in this country. So we’d be looking at a surgery, three weeks in a cone, and continuing the daily medications for up to a year. This approach has been fairly successful; I googled and easily found a human study that utilized the same approach that a 75 percent success rate.

But if it failed, he’d lose the eye, anyway.

So here I am, trying to decide. On one hand:

There are LOTS of perfectly happy, perfectly functional one-eyed dogs out there. We could surgically remove his eye next week and end his many months of daily administration of eye medications. Within three weeks he’d be ready to start finding his forever home. (Yes, I still want to find him a home somewhere else, so I can return to giving Otto more time and attention. But, believe me when I say it is going to have to be a PERFECT home, with someone who has lots of time and love and space for a special little dog.)

On the other hand:

Maybe this surgery and medication regime would work. It would address that bubble, that tear, whatever it is… and he just might recover his full eyesight. I would still be shopping for a home for him, but it would have to be someone within easy striking distance of the UCD VMTH, so he could continue to visit there regularly for follow-up studies. And if I can’t find that person, I could commit to continuing the daily damn drops (and commit my friends, too, who step up and take Odin and administer his medications when I have to travel and to whom I owe much!). But it might fail, and he’d still have to have the eye removed. The odds are good that I would end up keeping Odin after (potentially) many more months of living with him, which (perhaps) Odin would be happy about, but it would definitely come at the expense of more quality time with my old dog, Otto.

What would be “best” for Odin? I think he’d like to be done with eye pain, eye discomfort, and eye medication – and he can’t see much out of it right now, anyway. And there is no way to tell him that maybe, with more pain and time, he might recover his sight in that eye. And contribute to science! Pfft! Would he care about that? Would he be happier with (possibly) two eyes?

As of today, I just don’t know what I’m going to do. It’s a tough decision. Tell me, what would you do?