Don’t fly home with leftovers, America! That’s the message out of Atlanta’s Hartsfield-Jackson International Airport this week, after a Homeland Security with a nose for contraband thwarted one incoming passenger’s attempt.

The U.S. Customs and Border Protection office says that brave hero Hardy – a beagle whose job title is Agriculture Detector — did just that, hitting on a scent in a traveler from Ecuador’s luggage on October 11. Inside? A 2-pound pig’s head (cooked). Although we’re sure Hardy really deserved a bite, it was nonetheless seized and destroyed. 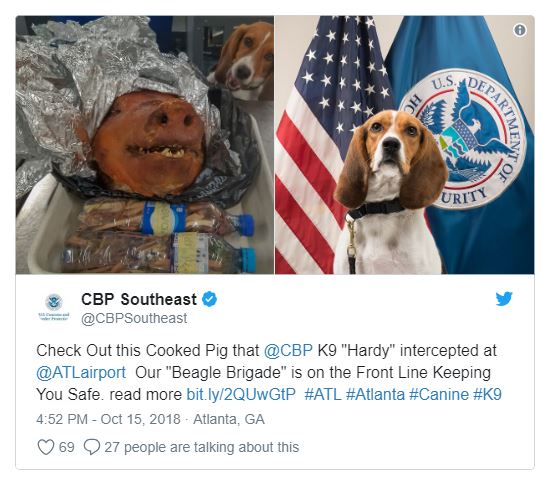 Pork and pork products from other continents are not permitted into the United States — this, in an effort to avoid introducing foot and mouth disease, classical swine fever and other animal diseases into the domestic population.

And while the pig’s head may not surprise you…

…some of the things that a dog can detect actually might!

Bacteria: Did you know that since the 1970s, dogs have been employed to detect disease in beehives? This helps beekeepers and other interested parties prevent the germs from spreading and infecting healthy hives. Dogs have made the detection process smoother and faster, inspecting as many hives in 45 minutes as it would take scientists to do in two days.

Diabetes. Yes, really! With their incredible, sensitive noses, dogs can be trained to sense when blood sugar is high or low and alert their diabetic owners to take action. They can even run and fetch an insulin kit.

Cow fertility. You would think the bulls could smell it, too, but dogs can actually detect it sooner. And that’s more important, because most cows are impregnated by artificial insemination. What’s more, bull semen is expensive! So some farmers have taken to using specially trained dogs to sense when their cows are in heat, just to make sure.