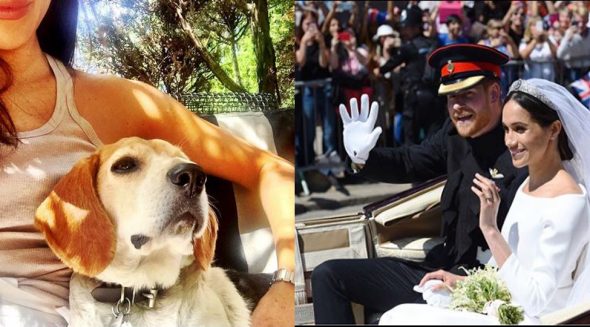 We’re not sure if Guy gets a title, but his mom is now the Duchess of Sussex!

Dolores Doherty, founder of the Oakville, Ontario-based A Dog’s Dream Rescue, admits she never imagined she’d see one of the organization’s alumni riding in a limousine with the Queen of England*.

“Such a thought never entered my mind,” she told the Courier-Journal amid laughter. “Most do end up in really good homes, with nice stories and lots of feedback from owners on how the dog has changed their lives,” she added.

Guy, of course, hit something of a lottery, becoming canine royalty over the weekend when his owner, Meghan Markle, said her “I dos” with Prince Harry. It’s been a long journey for the American dog, who originally hails from the Montgomery County Animal Shelter in Mt. Sterling, KY.

Many volunteers helped guy on his journey northward, where Markle eventually met him at an adoption event. She was looking for a companion for her other dog, Bogart. She took them on a walk together and the rest is (now part of royal) history!

Guy’s original shelter is a low-kill facility that euthanizes only as a last resort. It works closely with rescues to send dogs to places where they can get adopted, said shelter director J’Rie Elliot.

“(Markle) could have any dog she wanted. … And she opened her heart and home to a shelter pet. That makes all the long hours, sleepless nights and transports worth it.”

Elliot, who was just a shelter volunteer at the time, doesn’t remember Guy personally, but her predecessor, who has since retired, recalled him as a sweet little dog, she said.

“Our motto, ‘adopt don’t shop,’ has been heard on such a high level,” Elliot said. “She could have any dog she wanted. She can afford to buy any breed. And she opened her heart and home to a shelter pet. That makes all the long hours, sleepless nights and transports worth it.”

The marriage makes Markle the Duchess of Sussex. No word on Guy’s new title.

*Reports of Guy’s limo ride with the Queen may be unsubstantiated (see this Snopes post for details), but regardless, he is a royal beagle now!