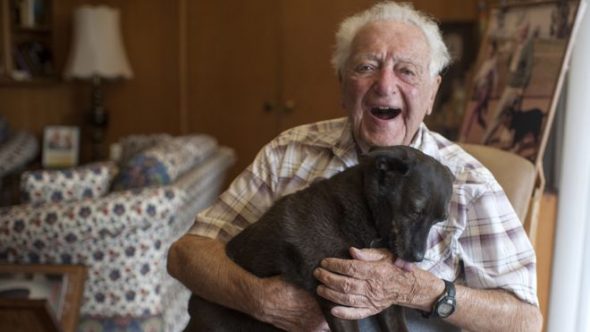 Lessner’s not sure that dogs are the key to longevity, but it’s been working for him so far! Photo: Dona Tracy

Milt Lessner, 104, lost his wife several years ago. Their dogs, too.

A retired psychiatrist who enjoyed the company of dogs his whole life, Lessner tried to rescue a dog, but after being turned away by several organizations unwilling to adopt out to a man of his age, he found the folks at Lionel’s Legacy in San Diego, CA.

Lionel’s Legacy specializes in senior dog adoption, and they arranged for Lessner to “foster” a dog named Layla for as long as he is able.

Affectionate and even-tempered, the agreeable little mixed breed fell right into her new life at Milt’s when he brought her home back in November of 2016.

“In no time at all, we were quite friendly with each other,” he told the BBC. “She’s very conciliatory and very agreeable. We’re trying to stay in good health, both of us. So far, we’ve succeeded and we’re still alive.” 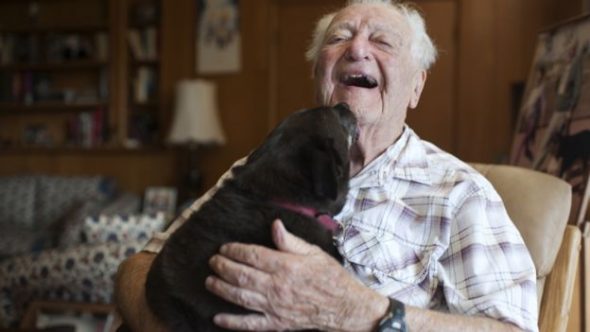 Lessner used to bring dogs to his office during his working years. They helped his patients relax. He says that Layla is a wonderful companion — house-trained, friendly and mellow.

“I can’t think of anything better,” he says.

Layla, who was found as a stray, had a nasty uterine infection called pyometra upon rescue. After an emergency vet saved her life, she went to Lionel’s Legacy.

Laura Oliver, the charity’s founder, says it’s rewarding to have chosen such a perfect match for Milt.

“You can tell they’re both smitten.”