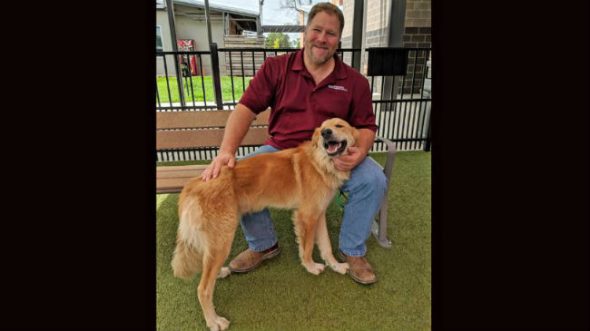 Don Bordelon and the newest addition to his family, Scooter, pose for a “gotcha” pic.

Though it has a happy ending, the story is sad on multiple levels.

Disabled Marine veteran Don Bordelon adopted a dog named Diesel from the Temple Animal Shelter in Temple, TX, back on July 3, bringing him home to his Moody ranch. He later learned that the dog actually belonged to a U.S. sailor on the East Coast. The adoption was a mistake.

Per the sailor, her brother had been watching the pup for a few months while she was amid medic training in North Carolina. He surrendered her dog without her knowledge or permission.

When she learned that Diesel had gone to a new family, she launched a Facebook plea that went viral and found its way to Bordelon in Texas. The shelter said the adoption was legit; Bordelon was not obligated to return Diesel, but although he had grown very attached to the 2-year-old yellow Lab, he decided he couldn’t keep the dog from its owner.

Last week, a friend of the sailor’s picked Diesel up. The dog will stay with his family in Houston until his owner’s September graduation.

It was heartbreaking, of course. Just last week he went to the shelter, but found the experience too painful. This past Monday, however, Bordelon decided to give adoption another shot!

“(He) immediately walked over to me and laid his head in my lap,” Bordelon told KWTX.

Bordelon added that he’d received offers of puppies and adoptions from all over the country when the story broke, but decided to rescue another local shelter dog instead.

He saw Scooter lying up against a fence.

“I took him out into the walk area and he immediately stuck to me,” said Bordelon. “He’s a very gentle giant, when he trots he looks like he’s walking on air.”

Bordelon will pick up Scooter later this week.