What Happened to Odin’s Eye? 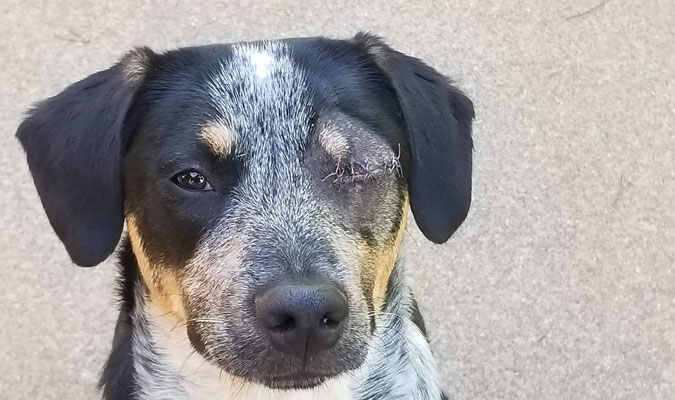 I asked in
a previous blog post what you guys would do in my position: go ahead with
an experimental surgery and medication regime requiring a one-year commitment
to the medication – and which, if it didn’t work, would still result in the
loss of his eye – OR, just go ahead and have Odin’s eye removed now, putting an
end to his 12 daily doses of various medications and discomfort. I really
appreciated every single comment and suggestion! They made me cry more than
once and I seriously considered each and every one.

Keep in mind that Odin is still, officially and legally, a
foster dog who belongs to my local shelter, the Northwest
SPCA. So while I have fostered him since he was about six weeks old, when I
took he and his mange-covered, starving littermates out of the shelter to care
for them, the management of the shelter had the final say. They have given me
tremendous latitude with my foster puppies’ care, and probably wouldn’t flat-out override any decisions I made unless it
was clear I had lost my mind (which, folks, can happen in the land of rescue
and fostering! There is new evidence about this almost daily; see here
and here
and here,
as just a few recent examples.) But of course I have discussed Odin’s situation
with the shelter staff at every step along our journey so far.

The opinion of the shelter veterinarian and the manager?
Let’s end the poor little guy’s discomfort and let him go on to live his life
without daily medications and monthly trips to the veterinary hospital at UC
Davis. And in the end, I agreed.

So a week ago on Wednesday, I took Odin to the shelter and,
tears in my eyes, put him in one of the cages in the recovery room, so he could
await his turn for surgery (he was second on the list for the day, right after
a spaniel who had a tumor on her abdomen and another on her tail that needed
removal). About four hours later, the RVT called me to let me know that Odin
was recovered enough to go home with me and that he’d need to spend the rest of
the day being very quiet, come back in a week to 10 days to have stitches
removed, and stay in a cone for about three weeks, to allow everything to heal
without complications.

He was still groggy when I picked him up and carried him to
my car, and I lifted him out of the car at home, too, although when I put him
down, he walked out onto my lawn and peed like a good boy. Then I carried him
into the house and put him on the couch, got a blanket and book, and told my
husband that we’d be camped out there together for the rest of the day. He had
been given pain meds (and I had more pain medication and antibiotics to give
him for the next week) and whined under his breath on and off all afternoon. I
felt horrible.

I also felt extremely
guilty for not putting a cone on him before surgery to acclimate him to wearing
one when he was not in pain. I hadn’t
thought of it until I dropped him off for surgery and the RVT mentioned he
would need to wear one afterward, to make sure he didn’t bump, rub, or scratch
at the delicate area as it healed. Duh! I should have prepared him – because I
think that learning to navigate with the cone was the worst part of his next 36
hours or so. On his first foray off the couch, the edge of the cone got caught
on the edge of the coffee table, and he cried out and scrambled in a panic to
escape the noise and bending of the cone. Then he froze, whining, and wouldn’t
even try to walk or move again. So, for his first potty, I carried him out the
door and past all the obstacles on my front porch, only putting him down on the
open expanse of the lawn. Even so, he looked down and the edge of the cone caught
on the grass and he just sat down, disconsolate.

An alternative to the dog cone

That’s when – again, late to the party – I thought of Rex
Specs, a ski-goggles-type of eye protection. I got online and ordered some,
paying for expedited shipping (although I was frustrated because there was no
way to order some to be delivered within one or two days). I had seen Rex Specs
at pet product trade shows, and they seemed like they would be perfect for
protecting the surgery site without the bother of the cone, with a curved shape
that fits dogs’ faces, soft padding all around the frames, an innovative
venting system that keeps them from getting steamed up, and fairly secure
straps that hold them on. Unlike a cone, they would also allow Odin to chew a
rawhide or bone or food-stuffed Kong to help occupy his quiet time. (Dogs need
their paws to chew things! They just can’t do this with a cone on!)

I did take a pair of sharp kitchen scissors and cut down the
cone a bit – about an inch and a half all the way around – so that it still
protected his whole face but didn’t require quite
so much room for him to get around without bashing on furniture, door frames,
and the legs of everyone else who lives in our house. Even so, Otto in
particular took to scrambling away from Odin every time he looked like he might
walk nearby.

Making the cone a tad smaller helped Odin navigate later,
but for those first 36 hours, I had to take the cone off every time I thought
he might have to potty. As soon as he was freed from it, he would trot right
out and take care of business. I’d let him eat without it on, and put it back
again. He was sad enough about it that it kept him quiet and laying on the
couch or the giant dog bed in the living room.

I spent that day working outside at home – mowing the
pasture, trimming shrubs, fixing sprinklers, and so on. I was also supervising
the activity of Woody and a friend’s dog, Ricky. Ricky’s owner had knee surgery
that day, and he’s a young and boisterous dog who requires a lot of exercise to
behave, so I offered to bring him to my house to exercise daily for a few days.
He and Woody ran and wrestled and dug for gophers and stayed active all day
long.

Friday, after pottying outside, breakfast, and medication
administration, I put Odin’s cone back on, got him settled on the couch, and
headed outside for another day of yardwork. Almost immediately I heard him
scratching at the door and howling up a storm. Since my husband works at home,
this wouldn’t do. I let him come outside, and put a leash on him, and convinced
him to settle near me as I worked. This is when he finally started getting used
to moving around with the cone, and not freaking out when it jabbed or caught
on things.

On Saturday, I had Ricky back for the day (he had been tired
enough after Thursday’s play to sleep for most of Friday). Between this
distraction/excitement and Odin’s growing competence with the cut-down cone,
all semblance of “keeping Odin quiet” went out the window. It was a frustrating
day for Odin and for me. I split the day between supervising bouts of slightly
restrained play between the three young dogs outside (with Odin’s cone on), and
giving him food-stuffed frozen Kongs and giant rawhide chews to work on inside,
with his cone off and me watching him like a hawk to keep him from getting up
and walking around (perhaps bumping the surgery site) or taking a casual swipe
at the itchy, healing area with a hind paw. It was nerve-wracking!

By the time the Rex Specs arrived on Monday, Odin was a
total cone-pro – they weren’t really necessary anymore. But I thought they
would be an improvement, nonetheless: He could finally stop bashing into all of
our legs with the dang cone, and enjoy chewing things, while keeping the
eye-site protected. But they haven’t been the panacea I was hoping for. Unless
you make the straps really tight, he can still paw them out of place – and
making the straps super tight puts more pressure on his face than can possibly
be good for the healing area, and obviously makes him more conscious of the
goggles than I’d like him to be. Still, if I can get him to wear them without
pawing at them, secured with a normal amount of tightness, I think they would
offer greater protection of the surgery site and less discomfort than the cone.
So I am putting them on him for short sessions while he does supervised,
enjoyable, distracting activities, like eating meals, working on food-stuffed
Kongs, following Woody around our fenced two acres, and so on.

Healing from the surgery

As far as the surgery itself: The site is healing beautifully.
I have to say that I think Odin is super happy to not have to submit to having
eye medication administered 12 times a day. I also think that having the
vision-impaired (but not completely blind) eye removed has actually helped him
see better. Since his initial eye injury, he’s always had a strange, slightly upright
posture and squinty expression when he tried to see things that are far away. I
notice that his posture and expression is softer and more relaxed now when he’s
looking at things that are more than 20 feet away; it’s just a guess, based on
a careful study of his posture, but I think he can see things way better with
his single good eye than he could with the same eye paired with the edema- and
scar-tissue filled eye. He looks less like a meercat and more like a regular
dog when he watches the world going by out my windows. I am thinking the
surgery was the right thing to do.

He will get his stitches out in a couple of days, and wear
the cone and/or goggles for a couple more weeks. When all his hair is grown
back, we will start trying to find him a perfect home.

Thanks again for your interest in little Odin. He’s a fun,
special little guy and I’ve learned so much from having him.

** About the eyeball itself: The veterinarian
who did the surgery put it into formalin to preserve it. Next week, on my next
trip through that area, I’m going to take it to Davis so the ophthalmologist at
the university veterinary teaching hospital who has been helping Odin can
dissect it. It will be interesting to hear her report when that happens.