When Darcy had trouble breathing on the plane, the flight crew came to the rescue

This dog-on-a-plane story has a happy ending!

Darcy, a French bulldog, was on a JetBlue flight from Florida to Massachusetts last week when her owners noticed she was showing signs of distress. Her tongue was turning blue and she was having trouble breathing.

“We all are affected by cabin pressure and oxygen fluctuations, human, canine and feline, etc., but the fact that the Attendants were responsive and attentive to the situation may have saved Darcy’s life,” Darcy’s owner, Michele Burt, wrote on her Facebook page.

The crew came to the rescue with an oxygen mask for the cute pup and now the photos have gone viral.

“I placed the mask over her face, and within a few minutes she became alert and after a short time she didn’t want the mask,” Michele said. “I believe [crew members] Renaud and Diane saved a life, some may reduce the value of the life because Darcy is a canine, I do not.”

Michele thanked JetBlue for its attentiveness to Darcy and wanted to remind people “that good people are doing good things on a daily basis even if it is in small ways or big ways.”

“We all want to make sure everyone has a safe and comfortable fight, including those with four legs,” JetBlue said in a statement to ABC News. “We’re thankful for our crew’s quick thinking and glad everyone involved was breathing easier when the plane landed in Worcester.”

The owners snapped a photo of crew member Renaud Fenster, who was instrumental in helping Darcy, before getting off the flight. 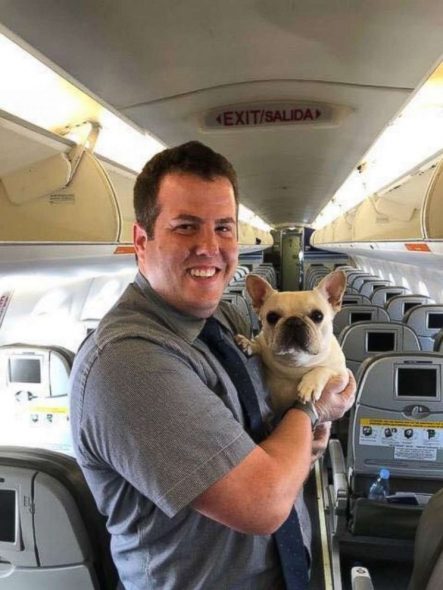